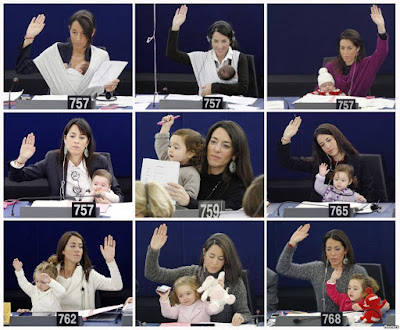 In September 2010, a photo went viral all over the globe. The photo showed a new mom, Licia Ronzulli, in the European Parliament raising her hand in a vote. She had a 44 day baby clinging to her chest in a sling. Voting on proposals to improve women’s employment rights, Ronzulli expressed surprise at the reaction. “We’ve been doing a lot, a lot of work in the European parliament and there was no interest in the press. Then I come with my baby and everybody wants to interview me,” she said.

Licia Ronzulli is a former Italian member of the European Parliament known for bringing her daughter, Vittoria, to the Parliament’s plenary sessions. During one interview Ronzulli said her decision to bring baby Vittoria into vote was not a “political gesture but a maternal” one based on the fact that she was still breastfeeding. She nonetheless said she wanted “to remind people that there are women who do not have this opportunity [to bring their children to work], that we should do something to talk about this.” After the furore caused by Vittoria’s first appearance, Ronzulli seems to have gained agreement across the political spectrum in Strasbourg for children to be allowed in as long as proceedings weren’t disrupted. The fact that she has campaigned for gender equality despite being a member (along with her husband) of Silvio Berlusconi’s People of Freedom party simply adds to the stereotype-busting nature of her behaviour. She has represented the People of Freedom party and New Forza Italia party 2009-2014. She won a seat in the 2009 European Parliament election. She was Vice Chair of the Delegation to the ACP-EU Joint Parliamentary Assembly and a member of the Employment and Social Affairs committee.

Licia Ronzulli, born on 14th September 1975, began her career working in a hospital and she graduated in psychology. In 2003, she became the chief of her department as coordinator at the IRCCS Galeazzi hospital of Milan, in Italy. During the Italian general election of 2008, she was nominated for the People of Freedom party in the district of Marche. When she was a candidate in the 2009 European elections, Licia Ronzulli was elected in the northwest of Italy with 40,016 votes. She joined the European People Party and became a member of the commission for Employment and Social Affairs and member of the Delegation for Relations with South Asia, as well as a substitute member of the Commission of Women Rights and Gender Equality and the Subcommittee on Human Rights. On 16th September 2009, she was elected Vice-Chairman of the Parliamentary Joint Africa-Caribbean-Pacific-UE Assembly, which has the express purpose of promoting human rights and democracy. She has also been involved with Progetto Sorriso nel Mondo (Smile Project in the World) as a volunteer. So far, Licia Ronzulli has presented over a hundred questions to the European Commission dealing with themes such as combating the spread of serious diseases in the European Union. The French magazine Madame le Figaro placed her in 3rd place on its list of most influential women of 2010, the year the photo of the politician voting while carrying her baby in a sling caused a media stir.

Since then we’ve had a series of pictures of little Vittoria Cerioli, nearly all of them affirmative. Licia obviously makes a point of turning up to vote for something she believes in – so there are lots of palms and even a thumbs up, but it’s the images themselves that are doing the high fives. Whether it’s the baby echoing her mother’s voting intentions, wearing a bobble hat or simply lying on the desk in front of the politicians; Licia herself usually serious, voting or speaking, but sometimes texting, laughing, looking a bit knackered; these pictures do more than a library full of working-time directives to raise questions about work and parenthood.

And by the looks of things, the adorable little Vittoria will follow in her mother’s footsteps. “Does my vote count, Mama?” she had once asked her mom. We are sure it will count some day.

About the Blog Owner

This blog belongs to Kashvi Khurana who loves to read about extraordinary feat of women. She hopes this blog also inspires other women to dream and live their dreams - just like it inspires her.