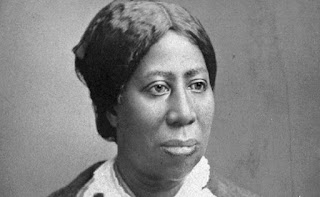 Anna Murray Douglass is best known as the first wife of black abolitionist Frederick Douglass. Her life was immensely overshadowed by her husband who was an African-American social reformer, abolitionist, and statesman gaining note for his dazzling oratory and incisive antislavery writings; and illustrates the challenges facing women who were married to famous men.

Anna Murray was born in Denton, Maryland, to Bambarra and Mary Murray. Unlike her seven older brothers and sisters, who were born in slavery, Anna Murray and her younger four siblings were born emancipated, her parents having been manumitted just a month before her birth. A resourceful young woman, by the age of 17 she had established herself as a laundress and housekeeper and later became very wealthy. Her laundry work took her to the docks, where she met Frederick Douglass, then known as Frederick Washington Bailey, a slave working as a caulker. He was six years her junior. (Because I’m focusing on his wife, I’m not going to talk in detail about Frederick’s truly amazing and influential life and work on behalf of abolition, women’s suffrage, and civil rights. However, if you aren’t familiar with his life, please check out his page on Wikipedia. He was a powerful, eloquent writer and speaker who could cut straight to the heart of a matter without hyperbole one minute and wax lyrically eloquent the next. It was truly amazing how he had educated himself while being a slave.)

Anna’s freedom made Frederick believe in the possibility of his own. When he decided to escape slavery again in 1838 (his third attempt after two failed ones), Anna encouraged and helped him by providing him with some sailor’s clothing her laundry work gave her access to. She also gave him part of her savings, which she augmented by selling one of her feather beds. After Frederick had made his way to Philadelphia and then New York, he wrote to Anna to join him. Anna did follow him, bringing enough goods with her to be able to start a household. They were married on September 15, 1838. At first they took Johnson as their name, but upon moving to New Bedford, Massachusetts, they adopted Douglass as their married name.

Over the remaining years of her life, Anna Murray-Douglass helped support the family financially, working as a laundress and learning to make shoes, as Douglass’s income from his speeches was sporadic and the family was struggling. She also took an active role in the Boston Female Anti-Slavery Society and later prevailed upon her husband to train their sons as typesetters for his abolitionist newspaper, North Star. After the family moved to Rochester, New York, she established a headquarters for the Underground Railroad* from her home, providing food, board and clean linen for fugitive slaves on their way to Canada.

The first years of the marriage appear to have been congenial. Anna bore four children—Rosetta, Lewis Henry, Charles Remond, and Frederick Douglass Jr.—during their residence in New Bedford. While Douglass searched for jobs on the city’s docks, Anna kept house on a small budget. When the family moved to Lynn, Massachusetts, she also took in piecework from the local shoe factories and saved everything that her husband sent to her while he toured for the American Anti-Slavery Society.

Strain began to manifest in the Douglass marriage once Frederick became involved in the abolitionist movement. He spent a good deal of time away from home giving lectures, including two years in Europe. Most of his white associates expressed disdain for his wife, at their most generous referring to Anna as a poor intellectual match for her husband, and treated her like a servant in her own home. They, like historians, had focused on Anna’s illiteracy and stoicism to bolster their arguments. Anna, however, had little time for intellectual pursuits while running a household and raising a family with little help from her husband.

By the late 1840s Anna lost much of her emotional support system. Her daughter, Rosetta, was away at school in Albany, New York; and her friend and household helper, Harriet Bailey, had married and moved to Springfield, Massachusetts. Meanwhile, her husband toured England, where rumors spread about the attention lavished on him by the English ladies. After his return in 1847 Douglass moved the family to Rochester, New York, taking Anna away from the small but active black community of which she had been a part in Lynn. Shortly thereafter she suffered the indignity of having the British reformer Julia Griffiths move into the Douglass home, which caused a storm of controversy alleging Frederick’s infidelity with Griffiths. The departure of Griffiths was followed by the arrival of Ottilie Assing, who installed herself in the Douglass home for several months out of the year over the next twenty years. For much of her life Anna lived isolated from supportive African American companionship while hosting a string of white abolitionists who could barely conceal their disdain for her. Only the extended stays of Rosetta and her children and the companionship of Louisa Sprague, Rosetta’s sister-in-law who lived in the Douglass home as a housekeeper, relieved Anna’s loneliness.

Nevertheless, Anna understood her husband’s role in fighting slavery and her role as his helpmate. She took pride in her husband’s appearance and accomplishments and in keeping a well-ordered home. She continued to take an active part in operation of the household, even after Douglass had become wealthy enough to hire servants. After Anna’s death her work was informally recognized by black women, who continued to refer to the home at Cedar Hill, Uniontown, D.C., as her home, and by Rosetta, who wrote a memoir of Anna’s life and named her eldest daughter Annie.

Rosetta’s memoir, “My Mother as I Recall Her”, deserves particular attention as one of the only surviving documents about Anna Murray Douglass. Rosetta celebrated Anna’s work, placing her mother squarely within the nineteenth-century “cult of domesticity”. Rosetta used Anna as a symbol of the equality of black women within that sphere during an era in which black women were portrayed as either the sexually promiscuous “Jezebel” or the maternal caretaker “Mammy” of white families. On the other hand, not only did Anna actively support the end of slavery by aiding her husband’s flight to freedom and allowing him to pursue antislavery work but also she maintained an impeccable home and preserved her own dignity and that of her marriage in the face of white assault. In Rosetta’s narrative Anna emerges as a model of middle-class womanhood.

Frederick Douglass, for his part, recognized the role that Anna played in his life. During his first visit to England he maintained a cordial distance from his enthusiastic female admirers, and he defended his wife when anyone suggested that she was not a fit mate for him. After his return home in 1847 Anna conceived their last child, Annie, and Douglass risked his own arrest to reenter the United States to comfort Anna in the wake of that child’s death ten years later. When Anna died in 1882, he fell into a depression that he described as being the darkest moment of his life. Nevertheless, he seemed less than concerned for Anna’s feelings in bringing into their home two white women with whom he was rumored to be sexually involved. He also married a younger white woman within a year of Anna’s death, much to the chagrin of his family and both the black and white communities.

For much of her life, Anna suffered from various ailments, particularly headaches that made her ill. In her later years she suffered from a stroke that confined her to a wheelchair and her bedroom. In August 1882 she died shortly after having a second stroke. One year after Anna’s death, Frederick remarried. His second wife was Helen Pitts. Their marriage was quite a scandal. Helen was white and twenty years younger than Frederick. His children felt the marriage disrespected their mother. Frederick and Helen’s friends were shocked because they felt the marriage was too sudden and because they were worried about the race and age differences. Helen’s family cut off contact with her altogether, and their local society was appalled that a black man and white woman were married at all. But, to give her her due, without Helen’s emotional support and energy, he might not have escaped the depression that haunted him after Anna’s death.

Anna was initially buried at Graceland Cemetery in Washington, D.C. But the cemetery closed in 1894, and on February 22, 1895, she was moved to Mount Hope Cemetery in Rochester, New York. Frederick Douglass was buried next to her after his death on February 20, 1895. They were later joined by Helen there.

Her entire life, Anna Murray was overshadowed by the enormous personality of Frederick Douglass. Yet, it is doubtful that Frederick Douglass could have been as successful in his work as he was without the assistance of this feisty woman in his life, his first wife and biggest support for 44 years. She played more of a supporting role in his life than an egalitarian one. Yet, in many ways her role was essential to his success. Without Anna’s financial and homemaking support, he might never have escaped from slavery and he probably would not have been able to pursue his career as a writer and orator. Even though his name is the name history remembers, it’s in part because of Anna that he was able to persevere. Yet, it’s ironical that the most talked about fact about their relationship is the white woman he married after she died.

* The Underground Railroad was a network of secret routes and safe houses established in the United States during the early-to-mid 19th century, and used by African-American slaves to escape into free states and Canada with the aid of abolitionists and allies who were sympathetic to their cause.

Source: Google search and Wikipedia.
Posted by Nishtha at 6:09 AM

About the Blog Owner

This blog belongs to Kashvi Khurana who loves to read about extraordinary feat of women. She hopes this blog also inspires other women to dream and live their dreams - just like it inspires her.